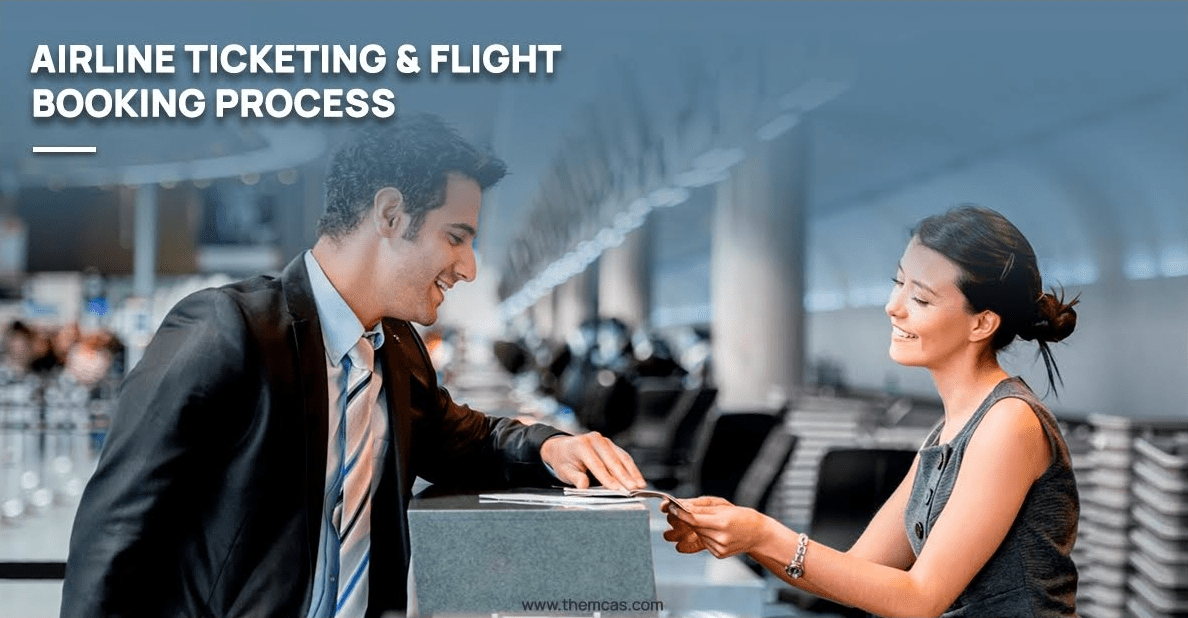 What is an Airline Ticketing and the Flight Booking Process

In simple words, an airline ticket is a document issued by an airline or a travel agency that confirms an individual has purchased a seat on a flight on an aircraft. This document is then used to obtain a boarding pass at the airport. The passenger is then permitted to board the plane using the boarding pass and the ticket, which is attached. The two airline tickets include the older style with coupons, now known as a paper ticket, and the newer, more common electronic ticket, known as an e-ticket. There are some critical purposes of an airline ticket, and they are listed below.

What is an Airline Ticket Booking?

Two key events must occur for a flight to be booked. Those events are as follows:

What is a PNR? It is a digital file that contains passenger information, contact information, and itinerary information. When you book a flight, a PNR is generated and entered into the airline’s Computer Reservation System (CRS), which creates an official record of your booking on the airline’s system.

2. Payment to be Made

To verify and guarantee your seat on the plane, airlines require proof of payment. When you purchase a ticket, the payment method is added to the PNR, and the price information is attached to a file known as a Transitional Stored Ticket (TST). These two files contain the information that will be printed on your final flight ticket.

Your flight has now been successfully booked and paid for. However, you are still not permitted to board the plane. You must first obtain a ticket for this to occur.

Ticketing in the airline industry is critical, and hence many airlines place strict restrictions on who can issue tickets on their behalf. This is primarily a financial issue.

Airlines want a global network of agents and booking sites to sell their tickets. At the same time, they also want to ensure that this occurs in a controlled manner. This resulted in the creation of large accrediting organizations that act as payment intermediaries between airlines and agents. The airlines receive a payment guarantee from all agents selling their tickets, and the agents, in turn, can sell tickets for those airlines. This means that sellers must be accredited to sell tickets on behalf of an airline.

The International Air Transport Association (IATA) is considered to be the world’s largest international airline association. It consists of nearly 300 member airlines from over 170 countries. IATA manages the Billing and Settlement Plan (BSP). BSP is a payment processing system that collects and distributes payments and commissions among member airlines and agents. To issue tickets for any IATA airline, all agents registered outside of the United States must be IATA accredited.

The Corporation for Airline Reporting which has over 200 member airlines, is a similar organization for agents registered in the United States or US territories. Their primary function is to act as a payment intermediary between agents and airlines through their payment processor. To issue tickets for its member airlines, all US-registered agents must be Airworthiness Review Certificate (ARC) -accredited. If you want to sell tickets directly, IATA or ARC is mandatory.

Steps in the Airline Booking Process

Let’s go through the process between the time of booking through a travel platform and baggage reclaim at the destination. The entire traveler/airline interaction can be broken down as below:

Searching for a Flight

A traveler can book a flight on the website of a particular airline. Otherwise, it is possible through indirect channels such as online travel agencies such as Expedia, Orbitz, Travelocity, or Priceline, or metasearch engines such as Kayak or Skyscanner. The search process is slightly different when it comes to the technologies used.

When you book flights through the website of the airline, the website bypasses the Global Distribution System (GDS) entirely by sending a search request directly to the airline and then a list of available flights are displayed.

Most travelers want to compare fares from different carriers or need to book a complex itinerary that involves more than one airline. Travelers will most definitely choose third-party platforms that aggregate offers relevant to a passenger’s query from various sources.

Through online travel agencies, flight information is obtained by online travel agencies. GDSs are air consolidators that negotiate bulk or net fares with carriers and then resell them to travel distributors and partner airlines. Travel platforms use smart booking engines to maximize revenue. They filter and prioritize airfare deals based on predefined business and pricing rules.

OTAs and metasearch engines are mostly used as options for searching, but the majority of traveler’s book directly through airline websites. This is due to two major factors.

Firstly, purchasing seats directly from the airline websites is easier, even from a technical standpoint, to change or cancel the reservation. Second, travelers have access to a broader range of ancillaries than is typically available through OTAs.

Regardless of the source of booking, the airline CRS must determine whether the flight product in question is still available for reservation. The status code HK (“holding confirmed”) is then returned to the travel retailer. The alternative response is UN, which indicates that the carrier is unable to fulfill the request.

At this point, the CRS must also create a. During the booking process, a retailer — whether an OTA or airline website — collects person PNR al information such as a passenger’s name and contact information and forwards it to the CRS. Once all required information is collected, the system generates the PNR number, which serves as an electronic address for the file in the database.

Typically, ancillaries are selected by the traveler during the flight reservation process. Passengers can access and modify their bookings via the carrier’s website by entering their PNR number.

Because not all ancillaries have their own SSR codes, they are classified as OTHS (others.) Specific codes are used by some airlines to supplement or even replace the IATA system. For example, under the SSR-like code FALC, Qatar Airways transports falcons.

To confirm an ancillary booking, a CRS determines whether the service is available on the specific flight and, as with the flight booking, returns the status code — HK (“yes!”), UN (“no!”), or another. The ancillary information is added to the PNR (even if the carrier declined the request.)

Making Use of Frequent Flier Miles and Points

Members of a frequent-flyer or airline loyalty program can use earned miles or points from previous flights to purchase additional airline services. They are often redeemed for benefits, such as an upgrade to business class. CRSs reserve a certain number of seats for frequent flyers to earn customer loyalty.

Passengers can log in using their accounts when purchasing tickets from an airline’s website, or they can obtain a loyalty program participant’s number to book from a third party.

The desire to fly must eventually be backed up by money. In other words, passengers must pay the fare for the use of a seat, as well as taxes and the cost of ancillaries.

Once the payment is confirmed, the traveler will receive an email with the flight itinerary and PNR number. That is enough to track the flight’s status, cancel the trip, or, in the case of a direct booking, modify the future journey and add ancillaries. People, however, require tickets to board the plane.

Ticketing and booking are different from each other. Booking only secures a seat on the plane. Ticketing means that the passenger has paid for the seat and has the right to use it during the flight. Even if a traveler pays for the trip immediately, as most OTAs and Low-Cost Carriers (LCCs) require, there is a time lag between these steps. Verifying payment details and finalizing money transmission can take up to three working days.

To issue an e-ticket or individual electronic receipts linked to the PNR, the company must be certified by the previously mentioned BSP and ARC. This is not something that all air travel retailers can afford. Instead, they book flights through accredited partners such as large OTAs, air consolidators, and host travel agencies.

And what if a trip entails multiple flights operated by different airlines? In such cases, carriers enter into a special commercial agreement known as interlining and issue a single ticket covering the entire itinerary. In addition, the Super PNR is designed to connect segments of the journey into a single record.

In any case, the e-ticket, along with the passenger’s name and PNR number, is finally emailed to the traveler. If the booking cannot be ticketed for any reason, the travel supplier must provide an alternative flight or a full refund.

We are dealing with the airline’s DCS, or departure control system, here. This PSS module is linked to the CRS as well as airport devices such as self-check-in kiosks, airport agent software, baggage drop, and even immigration control. The Departure Control System (DCS) handles all check-in and boarding procedures, beginning with ticket validation. This system is also in charge of entering customs and border security reservations, as well as optimizing aircraft weight and cargo handling. A traveler must provide their PNR and name during check-in so that the system can match it with those stored in the CRS and assign a seat. This procedure differs slightly between online and offline.

Online check-in is usually available 48 hours before the flight, but this varies by airline. A traveler enters information from an e-ticket on an airline’s website or app and gains access to an aircraft seat map to select a specific seat. Suppose a traveler does not choose a seat, then the system assigns a free one at random and issues an electronic boarding pass. The same logic applies to check-in kiosks. Check-in at the airport in this scenario, a passenger brings an e-ticket to the airport agent at the check-in counter so that the details can be entered and a seat reserved on a seat map.

Following check-in, the departure control system generates a boarding pass, which allows passengers to board the plane. It can be printed or downloaded to a mobile device. The document includes a QR code that serves as a one-of-a-kind link to the traveler’s flight information. As the passenger approaches the plane, a QR code is scanned, and the PNR status changes from “checked-in” to “boarded” to “flown.”

A plane has landed at the destination, and it appears that the journey has come to an end – unless a passenger’s luggage is misplaced. To prevent this, the airline’s DCS generates and prints bag tags with ten-digit numeric codes, also known as barcodes. The baggage handling system at the airport scans these barcodes to sort and track the luggage.